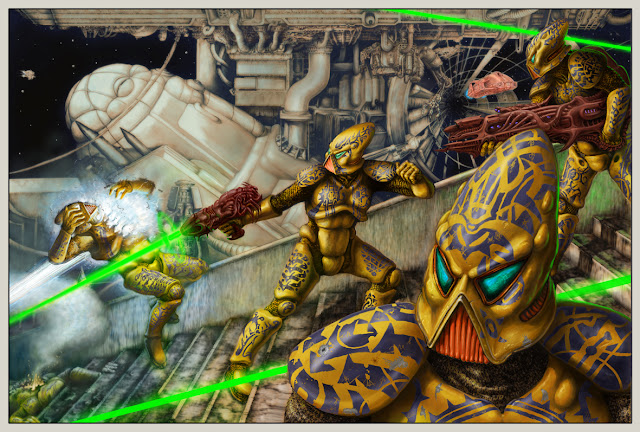 As I mentioned in my previous post, as a celebration of the 25th birthday of the Warhammer 40,000 game universe I have been creating a full colour paintover of one of my 5 original drawings which appeared in the first 40K rulebook back in 87 - not in an attempt to update this image to fit the present-day canon of that universe, but to re-present the original image in a new way. I had a lot of fun with it, so I hope you all like it!! The original appears below for comparison. (Click the images to see in their entirety) 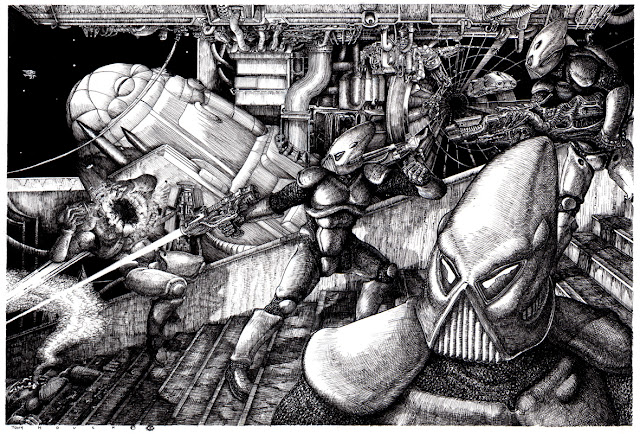 On the 21st of April I attended SALUTE 2012 tabletop wargames (and RPG) convention armed with some little brochures about my art and carrying some of my early 40Koriginals to show interested people. Met a few nice folks and dished out a few leaflets to some more. Got some good feedback, but failed to gain anything concrete or to sell any pics, even those from the very first 40K rulebook Trouble is, I'm not a salesman...I'm just really really shy when it comes to blowing my own trumpet. I really need an agent!
Talking of Games Workshop originals, as a celebration of the 25th Anniversary of the 40K game I'm doing a paintover of one of the 5 illos from Rogue Trader (from 1987) which I will post when complete. It shows a group of embattled Eldar in some kind of cavernous hangar retreating up a stairwell. It was drawn in the very early days when the game only had a few models and Will Rees's concept illos for reference and the illustrators were working a little in the dark, interpreting and expanding on the material available. This digital paintover is an attempt to present the original B/W image in full colour, without any attempt to bring it into 40K canon - see it almost as an 'alternative' if you like, or a reflection on the vastness of the 40K universe! The only real changes are to just, well, tidy up the worst of the drawing (-- it was 25 years ago after all!!) and present the image as I originally intended it. Thus the Eldar weapons are strangely organic and their suits, based on prototype models may look a little strange to purists (I'm sure there are some).
Meanwhile, here's another painting I'm still working on (another self-promotional piece) called Old Place. The earlier version is much browner and appears on my website here. 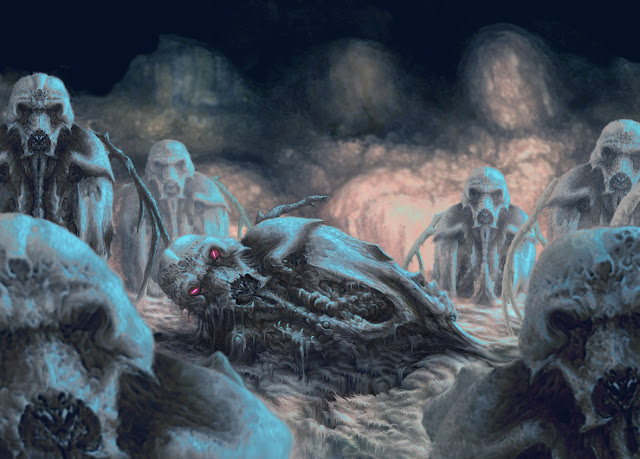