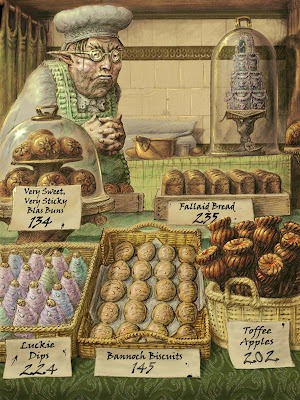 The App version of Spellcaster: The Forgotten Spell which I Illustrated this year is out now from Tin Man Games for the iphone, ipad and android and has been garnering great reviews. The paper book version will be available very soon.
I really enjoyed visualising the dark world of the Elder Fey with its twisty streets, bizarre architecture and weird inhabitants. I really felt this project was right up my alley, playing to my own artistic strengths with the same combination of humour and darkness that I tried to bring to my old WH40K and FF illos 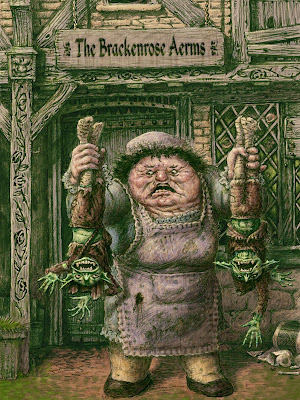 I was able to draw together elements from traditional fantasy, steampunk and anime.
Many of the illos were visual puzzles in themselves full of hidden little details. Hopefully the viewer will keep spotting new things in them for quite some time.
The artwork was created by first preparing highly detailed pencil renderings which were then worked on further using Photoshop and a Wacom Graphire Tablet. At this stage the illustrations were refined with extra tone and coloured, composition and characters .tweaked, text added.. 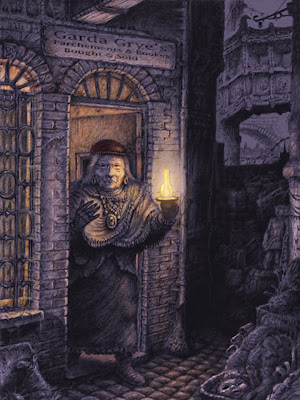 During this process I tried to avoid losing the texture and quirk of the underlying pencil work which to me was a vital part of the overall style. We will begin work on Book 2 very soon. Meanwhile I have another Gamebook project on the go for Tin Man Games which I may share with you in due course... 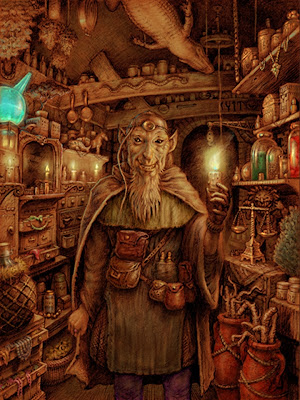 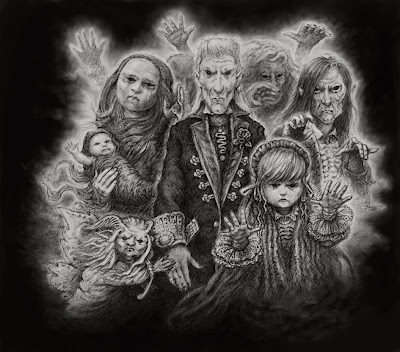 Another Vintage 40K Illo Dug Out And Scanned

At 34cm X 25cm this is one of the larger pieces I completed for GW in the late 80s, (too big to scan in one go!)
Set at the time of the Horus Heresy....I don't remember the backstory but there are some odd characters mixed in with the loyalist marines: An Imperial Guard commisar and an odd scientist guy. You tell me what's going on!! I'll add this to the illos for sale and if I can still make it I'll bring it to Oldhammer Day at the end of August. 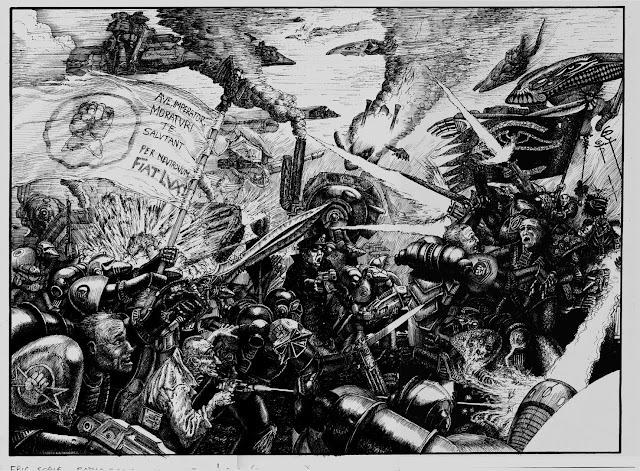 Right now I'm very busy with an exciting illustration project, The Forgotten Spell - the first of a trilogy of  evocative fantasy gamebooks for Louisa Dent Pearce of Spellcaster Games.

In this first book, You (the reader) are snatched from the mundane world and thrust into the terrifying city of Suidemor, a vast, fantastic and twisted metropolis built by the Elder Fey in a hidden realm beyond the mortal world. Hunted by the malevolent Olcrada you must solve puzzles and use spells find your way, survive and find the Forgotten Spell.


I'm especially enthused by this project because it plays right to my strengths as an illustrator. The backdrop of the bizarre city of Suidemort with its crumbling ragtag maze of twisted streets and alleyways is like an exaggerated steampunk Victorian London built by spell-wielding malevolent faeries, full of atmosphere. The population are a myriad of fey creatures: Elves, trolls, goblins, fey of all kinds, no two alike...I have been free to let my imagination run riot here!!  Best thing is that for the first time in many years I have been able to plunge myself into this project as a full-time freelance illustrator, which means I can give these illos the time and care they richly deserve and show my full mettle as an illustrator. I'm pretty proud of the work I've done so far and this is only the first book!! 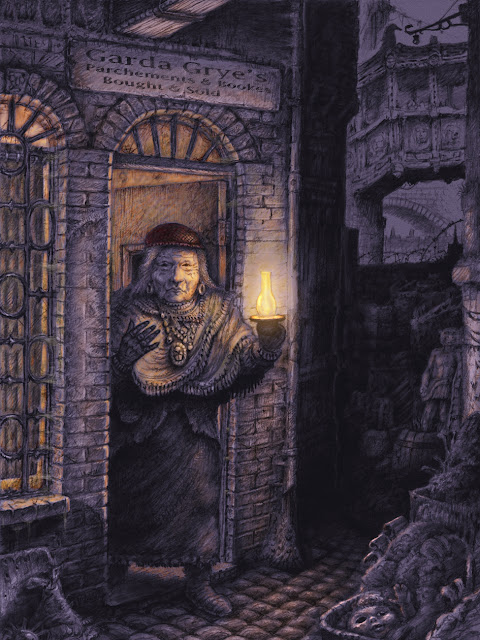 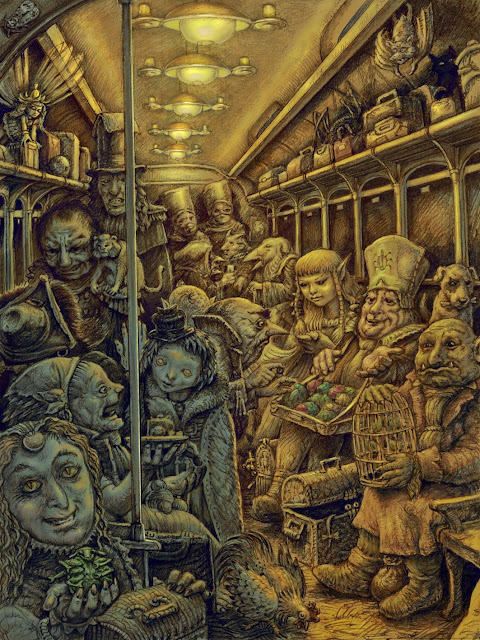 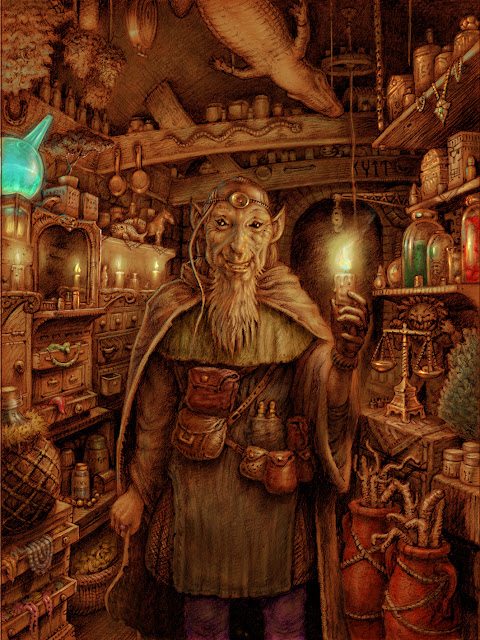 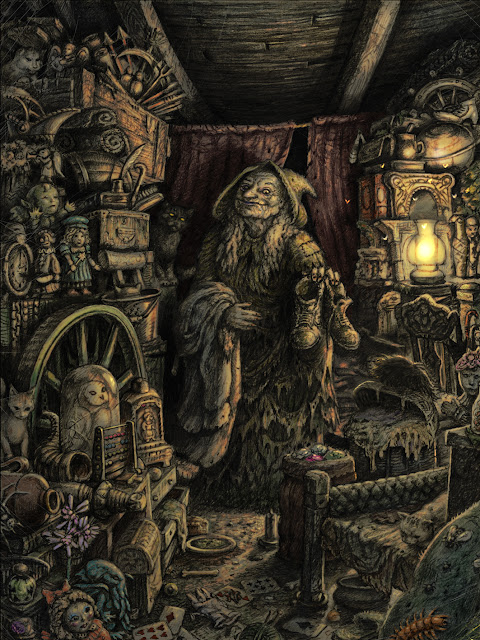 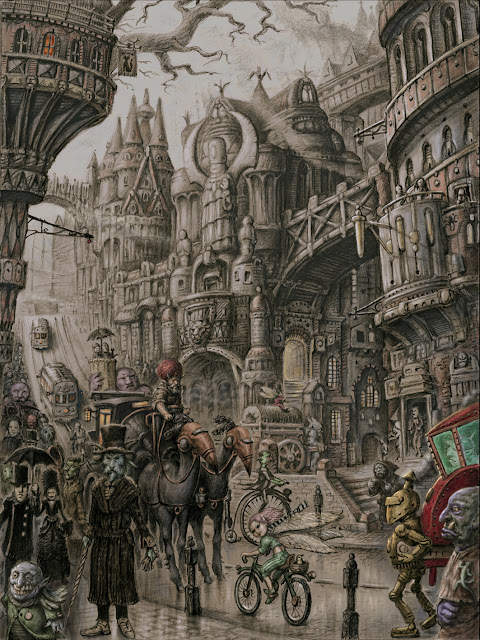 I had such great fun creating all these wierd creatures...here's a closeup: 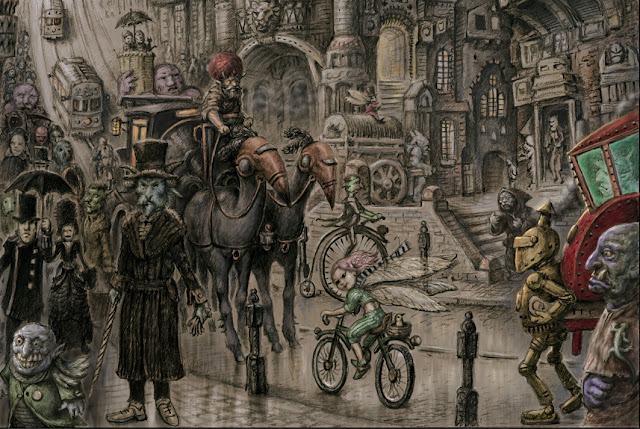 The illos have been created mostly in pencil, then scanned, modified and coloured using Photoshop. In each I've tried to achieve a depth of field. I want them to be images you can spend time to explore and spot new things.